It's all about Love 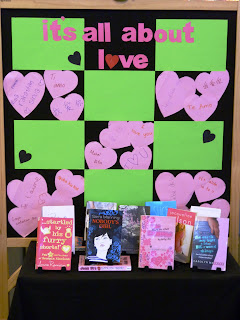 By Elaine Pearson
I was sitting thinking about a display for Valentines Day. I haven't done one for a couple of years and have loads of new books to promote.
As I was pondering the International Students came into the library for a meeting and an idea popped into my head:
I gave them some pink paper and asked if they would write "I love you" in their home language. Later I cut them out into hearts and put them altogether to make this display. It pleased them to be asked and see their languages displayed.

This is a good site if you need more languages:
I love you in 100 languages

From GoodReads, "Belly measures her life in summers. Everything good, everything magical happens between the months of June and August. Winters are simply a time to count the weeks until the next summer, a place away from the beach house, away from Susannah, and most importantly, away from Jeremiah and Conrad. They are the boys that Belly has known since her very first summer -- they have been her brother figures, her crushes, and everything in between. But one summer, one wonderful and terrible summer, the more everything changes, the more it all ends up just the way it should have been all along." Look out for the sequel: 'It's not summer without you'.

Labels: It's all about Love, Valentines Day

Library Link of the Day