Across the Story Bridge 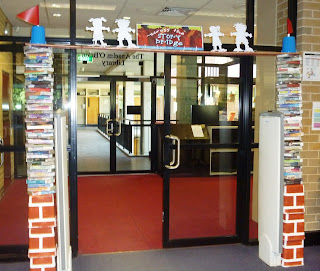 By Narelle Robertson
Thanks to Narelle, the AudioVisual Technician from Santa Sabina College [Sydney], for sharing this dramatic display idea which she used for Book Week 2010. I really like the idea of making 'books' out of old VHS boxes.

This is what she says about the display:
'Here are some photos of our library display for bookweek 2010
It was very simple to make.
We used old VHS tape boxes with photocopies of book covers inserted.
Then we drilled a hole throught the boxes to ‘stack’ them to make pylons.
Then using a plank of wood with a hole drilled into it at each end, we built our bridge.
We used old plastic tubs painted as bricks donated by boost juice,
We placed house bricks (which had holes in them) in the base of the tubs to anchor the whole bridge.
We then printed the banner associated with book week, and added our cut-out children.
Posted by Elaine at Tuesday, March 08, 2011

Library Link of the Day